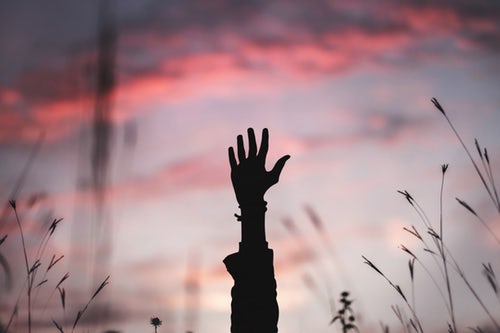 As we concluded our Isaiah series, we focused on the prophet’s vision of the future.  Below is the graphic we created to explain this vision. 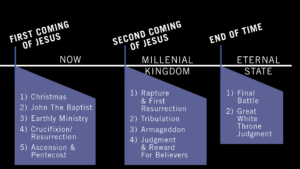 I also wanted to post some really great questions that I recently received, along with my responses:

Q: I’ve read books where after the rapture occurs, those remaining on earth have to choose to either repent and follow Jesus or follow Satan while living a hell on Earth. Today you read these verses:

I do not want you to be ignorant of this mystery, brothers and sisters, so that you may not be conceited: Israel has experienced a hardening in part until the full number of the Gentiles has come in, and in this way all Israel will be saved. As it is written: “The deliverer will come from Zion; he will turn godlessness away from Jacob. And this is my covenant with them when I take away their sins.” (Romans 11:25-27)

What does it mean that the “full number of the Gentiles has come in?” Does that mean there will be no more Gentile conversions during the tribulation?

A: Romans 11 is speaking specifically about the return of Jesus to the earth AFTER the tribulation. It is very possible that Gentiles will come to faith during the tribulation, but the mention of “a powerful delusion” in 2 Thessalonians indicates it will not be a common occurrence. Perhaps one way to think about it is Gentiles expressing saving faith in the tribulation might be as common as Jews coming to faith now.  Many Jews have proclaimed Jesus as Messiah but most remain blinded according to 2 Corinthians 3:12-18.

Q: At the Battle of Armageddon, I have always thought that the armies were collections of nations against God’s people but that there was a third group: others in the world who were neither believers nor fighting against God.  Is that true, and if so, what happened to them?  I had believed it was this third group and their descendants who were deceived by Satan at the end of the Millennium.

A: I don’t know that the Bible specifically references a third group people who are neither Jews nor against the Jews, but it doesn’t seem to be the case. The Battle of Armageddon appears to be a worldwide effort to exterminate God’s people once and for all. All in all, I don’t think there are many neutral bystanders, but there of course could be.

As for who is deceived by Satan, my sense is that it includes the descendants of the Jewish people who made it through the Battle of Armageddon, showing once more that faith in God is not hereditary, but must be chosen by each succeeding generation.  A similar analogy might be Americans today who can barely remember or affirm what many of our founding fathers believed about God only two hundred years. One thousand years is a long time with multiple generations. Many of those appear to be nominal believers until Satan comes and deceives them.

Q: At the second judgment when the books are open for the non-believers, they are judged by their works.  Does this imply there are levels of hell where one level of suffering is not as bad as others?

A: I believe Revelation 20:11-15 affirms various degrees of hell. Another passage to support the idea of people being punished in varying degrees at Jesus’ return is Luke 12:42-48.

Q: In Revelation 20:4, Paul says “And I saw the souls of those who had been beheaded because of their testimony for Jesus and because of the word of God.  They had not worshiped the beast or his image and had not received his mark on their foreheads or their hands.” Does this allow for some to be saved during the tribulation?

A: Those who do not worship the beast may just be Jews, but I agree with you that it does seem that some are saved although it appears they are martyred for their faith.

All Posts »
PrevPreviousWhen Do Christians Go To Heaven?
NextPrayers for Children as They Head Back to SchoolNext
Menu