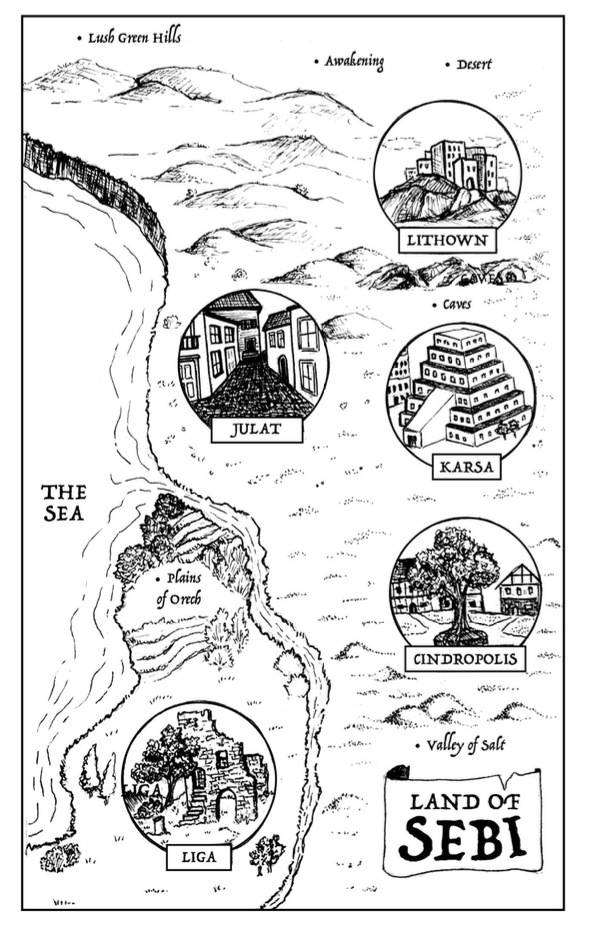 The third section of the interpretative guide to Passage to the House of Power from The Scroll of Remembrance series focuses on the symbolic worlds described in the story.

Unpacking the Symbolic Worlds in The Scroll of Remembrance

The Scroll of Remembrance is a prophetic parable employing symbols, so it is important to understand the symbolic worlds of the story.

The main world in The Scroll of Remembrance is the Land of Sebi. Sebi is similar to the world in which we live, except many of the invisible spiritual realities are made visible. One of the hallmarks of our world is that the physical is visible, but the spiritual is usually invisible and can only be “seen” through the eyes of faith. In the fictional land of Sebi, spiritual things and beings such as the Holy Spirit, demons, living water, legalism, pride, spiritual armor, spiritual gifts, maturity, and immaturity are at times rendered visible. Allowing spiritual realities to be visible required creating a fictional world, not simply using a spiritualized version of this world.

In the world of Sebi, many things are similar to our world. Sleep, for example, is still necessary; the sun rises and sets; many of the laws of physics are still operative. Other elements are meant to remind the reader that it is a different place. Food and drink are optional. They represent other things – food represents social interactions, drink represents either living water or sinful cravings. Similar to our world, the sun rises and sets, but the dim sunlight in Sebi represents spiritual haziness. Light can either be created naturally through torches and incandescent stones, or spiritual light emitted “magically” from a scroll or animal.

Because Sebi represents a hybrid of the spiritual and physical, the way one enters the world is not through physical birth, but through conversion, either “awakening” (Rom’s experience) or journeying into Sebi from a faraway country (Avi’s experience). There are no parents, siblings, or biological families. In addition there is not marriage nor romantic relationships. Friendship is the primary vehicle for relationship. Sometimes friendship in Sebi includes characteristics that we might associate with parental love or romantic love in our world.

It is important for the reader to understand that The Scroll of Remembrance is told from Rom’s point of view. And, he is learning about this world along with the reader. At the beginning of the story Rom is a new Christian. He is awakened from spiritual death when Jesus calls him by name (John 10). The very first thing Rom does after waking is drink from a goblet, which represents drinking living water (John 4). Then, Rom discovers Rohka, who represents the Holy Spirit. Because this is all new to Rom, he doesn’t immediately understand what is happening. He doesn’t know he is being called from death to life. Rom doesn’t understand that the Holy Spirit came to him in connection with drinking living water. More than just incomplete, however, at times people’s perspectives in the book are wrong. This is similar to the book of Job in the Bible. Because neither Job nor his friends are present for the discussion between God and Satan in the prologue to the book, their statements that Job’s suffering is the result of sin accurately reflect their views, but their views are wrong. In The Scroll of Remembrance, for example, when Rom first experiences the people of Julat, he experiences them as if they are “spiritual giants” (tall, beautiful, powerful), but he is wrong. Over time he comes to realize that outward appearances don’t accurately reflect spiritual realities, and the reader has glimpses of how his perceptions change.

In addition to the world in which all the action takes place, there is a second “world.” The reader engages with this world through the written stories on Rom’s scroll. This second world is the world of the Bible, especially the Old Testament. In the same way that the settings of the stories from the Old Testament are almost inaccessible to us now, except in part through archaeology, the stories on Rom’s scroll speak to his situation, but the world from which those stories come is inaccessible to him, except through what we might call archaeology (for example Rom discovers that Cindropolis is built on the ancient city of Arritu).

There are some important differences between the world of Rom’s scroll and Sebi that acknowledge the differences between the world of the Old Testament and our world today. One primary difference is the King of Sebi (who represents God the Father) is actively ruling in the stories contained on the scroll, whereas in Rom’s time the King is present (as shown by the prologue) but does not appear to be exercising his rule and reign over Sebi in any visible way.

In the same way that stories (and instructions) from the Bible are accessible to people today, the stories on the scroll about Peytos, Daybe, and others are the shared history of everyone living in Sebi. This is true even though most characters are unaware of the stories and characters. The stories come to Rom’s scroll as he needs them, representing the idea that God often gives us a particular passage of the Scriptures at a particular time to help us in specific situations. Avi’s scroll works differently because he has access to the entire story (more like an actual Bible), indicating that sometimes we take the initiative in choosing the particular passage we might study or meditate on in Scripture.